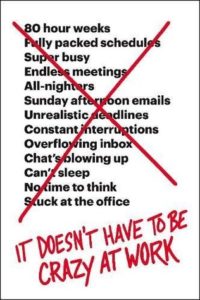 I wanted to read this book for quite some time but just could not find the time. I am happy that finally, I have completed the book. I found some of the advice to be insightful:

* Your company is a product. In fact, it should be your best product.

* Creativity, progress, and impact do not yield to brute force.

* Office hours: subject-matter experts at your company should hold regularly scheduled office hours where they are 100% available for questions, pair coding, etc. This creates a nice balance where the expert can provide guidance to others without their day being constantly broken up by distractions.

* On work-life balance: If it’s easier for work to claim a Sunday than for life to borrow a Thursday, there ain’t no balance.

* Library rules at the office. To be able to have an office that’s productive, follow the rules you do at a library: be quiet; if you need to talk to someone, find a room; don’t distract others unless it’s very important. This creates an office that is more peaceful, less stressful, and better at helping people stay focused and get things done.

* Budget, not estimates. Most software companies come up with a product idea and ask the engineers to estimate how long it’ll take to build. These estimates are notoriously wrong, often by an order of magnitude. Basecamp does the opposite: they set a budget for a project and ask what can be built within that budget. The key idea is to figure out how valuable the feature/product is likely to be, to set a budget that reflects your “appetite” for getting that value, and then doing your best to figure out what can fit within that budget.

* Basecamp organizes most of the company into teams of three (e.g., a designer plus two engineers). Three people are enough to do important work but small enough that communication and planning overhead is minimal. With bigger teams, you almost always need management, and there is way more overhead, so it’s way more expensive, without that much more actually getting done.

* Don’t act immediately on every great idea. Create a culture where you _always_ wait to implement a great new idea. This forces people to sleep on it; very often, a week or two later, you realize it wasn’t as great of an idea as you originally thought. Moreover, this avoids constantly jumping from one new idea to the next, leaving lots of unfinished work in your wake.

* When you say no, you’re saying no to just one thing. But when you say yes, you’re implicitly saying no to millions of other things. Saying no leaves all your options on the table, as you can usually say yes later; but if you say yes right away, you immediately remove most of your other options.

But I also found some of the advice to be questionable at best, or flat out lying/BS at worst:

* They seem to create the impression that offices have no value whatsoever, and that everything should be done remotely / asynchronously. The reality is that it’s a trade-off. Remote-first companies have many benefits, such as no commute, full control over hours, few distractions, and no office costs, but they also have some major drawbacks, such as reduced team bonding, increased barrier to asking questions, far less serendipitous discussions, more complexity in management, more complexity in giving feedback, and so on.

* They claim that they never raised any money from VCs, but that’s misleading at best, as they raised money from Jeff Bezos’ personal investment company (https://signalvnoise.com/archives2/be…). Perhaps it’s not a VC firm, but perhaps they should stop pretending like they never raised a cent.

* They claim to never set goals or do long-term planning as a company, and apparently just make it all up as they go along. Ignoring for a second whether that’s a good thing for a business or not, the reality is that _everyone_ has goals and does long-term planning: at a bare minimum, you have goals and plans in your mind, but beyond that, I find it hard to imagine co-founders working together for 15+ years without having dreamed up all sorts of long-term plans and goals. So when they claim they don’t have goals or plans, all they are really saying is that they don’t publicly verbalize their goals or plans.

Overall, the book is hit or miss. The writing can be funny, but also obnoxious; the list format is efficient, but not enjoyable reading; the advice is sometimes valuable and sometimes absurd. You’re probably better off saving time and reading their blog posts.